2014 was going to be my year. I set some pretty intense half marathon goals for myself back in January. Like I-N-T-E-N-S-E and then Patella Femoral Pain Syndrome, “runners knee”, happened and I’ve spent the past 3 months doing alternating walk/run (but not a trudge) training sessions. Can I say, discouraged? I mean all of my friends are setting fantastic PRs and getting to do amazing runs in the mountains and I’m running solo (for the most part). Waaahhh-ambulance called.

Marathon weekend changed from a fun event for Jeremy and I (plus friends) to a solo girls weekend. Through various scenarios (financial freedom and an unexpected injury for him) the weekend morphed and changed several times prior to the event. It was touch-and-go there for a bit about whether I’d defer or carry on.

In the end I chose to go and I’m so grateful I did. I got to celebrate with friends some huge accomplishments, new PR’s, first Marathons for 2, fueling mysteries resolved, race strategies sorted out and more.

The weekend started out with a road trip.

3 girls from the No Pressure Running Group (NPRG) and I met up to drive to Richmond.

Lots of giggles and girl talk and off we went! We started out at the Expo with a sensory overload along with hundreds of other runners. I gave into the expo-hype and bought a flip belt. Jeremy had researched this product for me before the expo so I had already been considering it as a solution for carrying my phone during the race. I tried it on at the expo and loved it; impulse purchase for the win! We took photos (tinged in green?).

Look at this amazing group of women I get to run with!

After the Expo we went to our friend’s in-laws home to “pre-game”. 8 of the girls in the NPRG stayed in the same home, along with extras. We laughed and teased, shared our nervousnesses, fixed watches so the settings for race day would be helpful and just had fun hanging out, not running.

That evening we all bunked down sleep-over style and had fun giggling together as we fell asleep. Apparently this trip involved a lot of giggling!

The next morning we got up insanely early. I think each of us slept approximately 4 hours. We all put on our race clothes with our throw away outfits on over the top and went to find parking.

We all wore out some pretty awesome throw-away outfits; fashion fiascos but oh-so-fun. 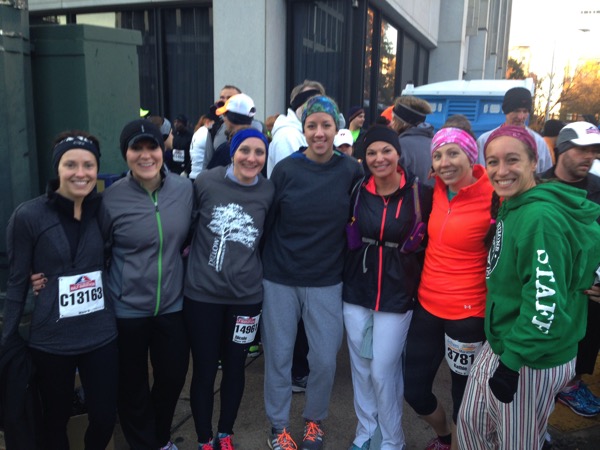 We arrived at the race, took care of turning in our drop bags, took a few more photos and then those of us running the half went to stand in line. Next time we race we’re standing with our friends and waiting for our wave to come to us. The wind tunnel Ellie and I stood in before the race was no bueno. 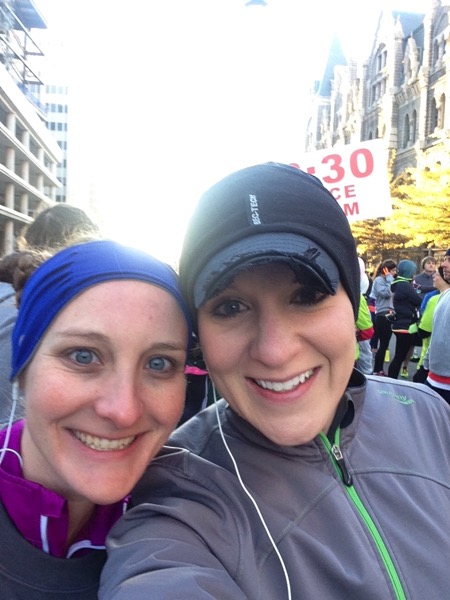 This course is so cool because it feels like the entire city of Richmond comes out to support the runners. There might have been 10 feet of race course without someone cheering, yelling or holding a sign. So. Much. Fun. There’s music along the entire course, (but I still wore headphones) and the race is a good mix of park, residential and city.

The fuel/fluid support along the race is entirely different fare than a trail race and kinda lame if I’m honest; I mean water and Powerade only, for the most part. Where’s the broth? PB&J? Potatoes? There was an unofficial aid station giving out gummy bears and Yeungling, so there’s that. Some of the funny signs included, “Don’t stop, just pee!” “You’re too far into this race to trust that gas!” “Free hi-fives!” (With a cut out for her hand). “You’re almost there!” (at mile 4). “I’m so proud of you random runner!” “Imagine Ryan Gosling is at the finish with a free puppy!” “Can you run faster? I’m cold” “What does the fox say? Run, run, run, run, run, run, run, run!”

I ran with my friend Ellie until between miles 5 and 6 and then we parted ways. She’s one of the most positive, intentionally joyful women I know and she has a wicked sense of humor. We were laughing at various things along the way, including one unfortunate runner just fell before mile 3. We’re not sure what he tripped on but he went down hard; we may be mean people. Some wardrobe malfunctions happened for other runners and we were grateful for our careful preparations. Once Ellie and I parted ways I continued my pattern of walking 45 seconds every mile and just enjoyed the day. It was warm(er) in the sun, and freezing in the shade.

So far the only photo that has been assigned to my bib number is this one. I’m sure there’s a beautiful tree or something I’m gazing at fondly. 🙂

The half marathon course and the full overlap at various points. The 4 mile mark and 20 mile mark run parallel, then from mile 8(ish)/21(ish) to the finish the routes are the same. This, for me, was an incredible experience. Four years ago when I ran the marathon, this portion of the course was M-I-S-E-R-A-B-L-E; I mean, I almost gave up on running after the marathon. It was a beautiful, redeeming process for me to enjoy the race for these 5 miles. I kept thinking, gosh I wish I were running hard here, but in spite of that, in spite of walking a portion of every mile, I knew my walking was intentional. I know my body is capable of (MUCH) faster speeds, but I wasn’t in mourning. I accepted that in order to run long term, taking care of myself right now is important. So I celebrated and I celebrated the experience. I smiled a lot during this 5 mile stretch. Some of the smiles were internal, some external. I prayed for my friends running behind me. I may have neglected the people in front of me when I prayed. I prayed that none of the marathon runners would catch me, let’s be honest. I prayed for happy races for my friends. I prayed for endurance. I prayed for a healthy mind game and a delightful day for each of them.

I crossed the 10 mile mark and told myself, “only a 5k left!” I crossed the 11 mile mark and thought, “only 2 miles to go!” I crossed the 13 mile mark and thought…”uh, where’s the finish line?” They have you finish the race heading toward Brown’s island. The last .2 miles are downhill. Let me tell you, downhill running (gravity running, as it is called) sounds like a great way to finish a race, but when your knees hurt, downhill is way worse than uphill. I was determined to smile my way across the finish line. I was jubilant at the end. I was able to celebrate this moment and mourn a bit over the injury, but celebrate nonetheless.

I crossed the finish line at 2:17:14, my slowest road half marathon by far, but still faster than the first place marathon finisher. So there’s that ;).

I walked smoothly down through the finish shoot, grabbed a water, my medal and… THE FINISHERS BLANKET! They give you a BLANKET at the finish. How wonderfully marvelous is THAT idea!!!

I grabbed my drop bag; it was a brilliant idea to start in a wave way off my anticipated finish time because my drop bag truck had no line (sneaky, sneaky). After I found a quiet, dry place to change I removed wet clothing, found and ate some food, grabbed another water and went to watch the other finishers.

My favorite finish line “performance” was a woman who had to be in her 60s. She took off her hot pink race shirt, leaving a white sports bra and pants, she swung her shirt around her head lasso style. Let’s be honest, she kinda needed to keep her shirt on. The crowd went wild, the announcer said, “Well, I told you all to celebrate!” I was giggling so hard! Other runners sprinted to the finish, some struggled every last step, but what an accomplishment for all!

I caught up with some of the other runners and celebrated their accomplishments and then began waiting for the marathon finishers. I’m super proud of the girls who ran MMTR two weeks ago and then ran the marathon. Super proud to know and run with these women!