On a sunny day, I used my analog watch (which I use at work in air-gapped environments) to find north by holding it in front of me and pointing the hour hand at the sun. Halfway between the hour hand and 12 is the north-south line and north is pointing away from the sun.
While cloudy (and also while not so), during my 16km observation hike particularly, I used snow on the north facing slopes and dry on the south facing slopes for direction. I have also regularly used direction during the winter with snow on the southern sidewalks and dryness on the northern sidewalks. Additionally while on recent hikes, moss on isolated trees was not used, but pine trees tend to grow on the north facing slopes and less so on the south facing slopes, adjusting this observation for this hike on the eastern facing Front Range.
At night, I located the Big Dipper (Ursa Major) and, using the end two stars, followed that line to locate Polaris, the North Star to find direction.
While backpacking, I used my hands and the horizon method to determine how much time we had until the sun set behind the peaks. We were able to comfortably finish setting up camp, make our meal, and get ready for nightfall in time.
On a morning walk, I used my hands to measure the height of a tree using the felling method. I checked the approximate result using the Measure app for iOS (3D tech) and was accurate within a few feet.
I measured the distance of a far away object by extending my arm with thumb up and closing my left eye, then switching eyes and counting the number of objects that could fit between the difference. Multiplied by 10 (the factor from eye to thumb), this provides the approximate distance. The first Boulder Flatiron is 11 first Flatirons times 10 distant. The parking lot light opposite us, a 1 foot or so object, is 6 lights away times 10, about 60 feet. The method is dependent upon know the approximate width of the object.
I used my compass and titanium whistle (as a “metal stick”), which I carry in the field, to create a sundial. I oriented the compass to north and stood the whistle up in the lanyard where it fits with it leaning slightly. Keeping the leaning angle of the whistle pointed north on the compass, the shadow cast by the whistle creates the hour hand making a watch face out of the compass face, approximately noon in this case (which will also be the least accurate time of day with the sun “straighter” overhead). 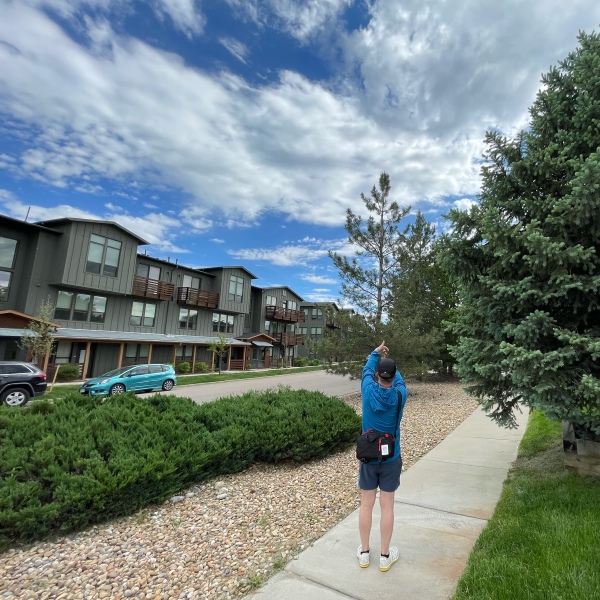 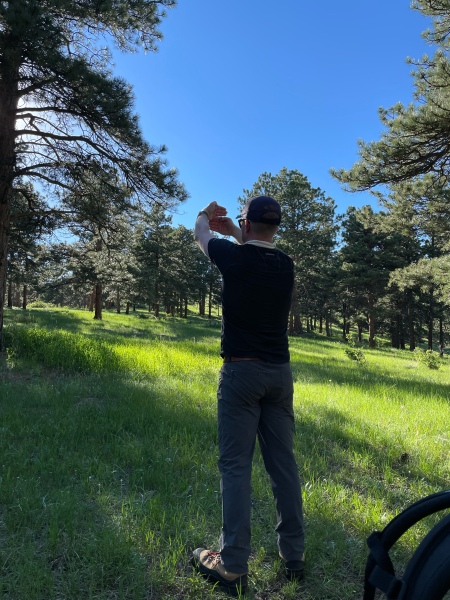